The GBP/USD currency pair continued to lose ground again on Monday as the market opened for the new week. The loss went on in the first part of the European session till it slid to the lowest point seen by the pair since September of 2020 in the close quarters of 1.2720 to 1.2715. 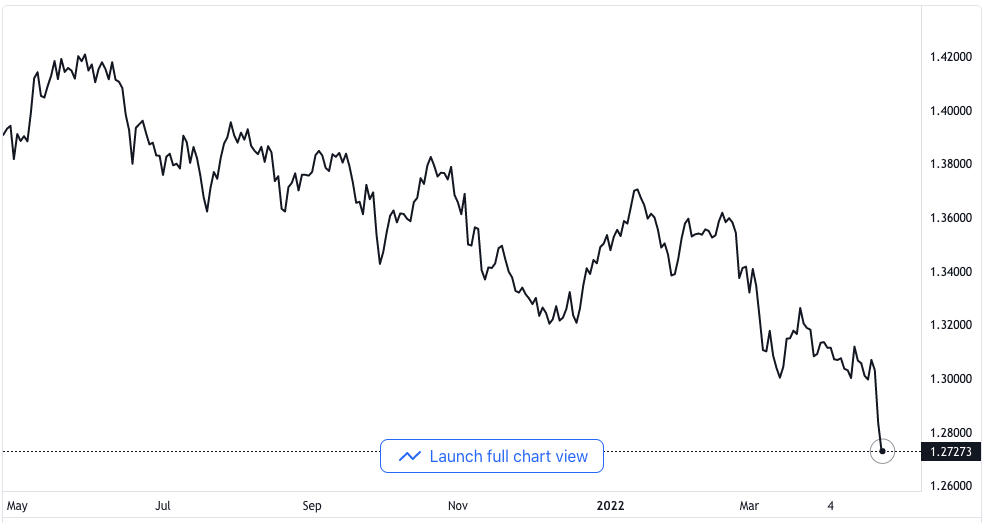 The pair prolonged the decline from last week from around the 1.3100 benchmarks, and it continued to be under heavy pressure of sales for three days straight on Monday. The pound sterling suffered the effect of the abysmal performance of the United Kingdom retail sales report that was published on Friday, as well as the service Purchasing Managers’ Index.

These two weighed heavily on the pound sterling. In combination with the continuous purchase of the US dollar, the condition of the pound sterling became a major reason that kept putting a lot of pressure on the GBP/USD currency pair.

The UK National Statistics Office made a report on Friday which entails that the country’s volume of retail sales has fallen by 1.4% month-on-month in the month of March, and it made a suggestion that the consumption rate from higher inflation might have been released.

In addition to that, the flash Purchasing Manager Index points to the huge loss of speed for activities in the service sector since the Omicron variant struck business interests at the end of 2021. It further revealed that the economy of the United Kingdom is suffering under so much stress as a result of skyrocketing cost of living.

The US dollar, on the other hand, keeps gaining considerable support from the market’s expectations of the stringent monetary policy from the Federal Reserve, and it rose to over a high point of two years. Federal Reserve Chair, Jerome Powell, had mentioned Thursday during the spring meeting of the International Monetary Fund and the World Bank that the possibility of increasing interest rates by 50 basis points at the May meeting of the reserve is very well on the table. He equally gave leading clues to the possibility of a series of further increases this year after that of May.

The reaction of the market to that statement from Powell was swift as it began to price in very high-interest rate increases as high as 75 basis points for the subsequent meetings of the reserve scheduled to come up in June, the next one for July while after that will be September.

The COVID and lockdown conditions in China also raised more worries about the slow pace of the global economy and the diminishing appetite of investors for risky investments. The stock market revealed this in a sea of red arrows that boosted the standing of the US dollar as a safe-haven commodity.