The USD/JPY currency pair kept track with its increasing trajectory during the early European session and it scaled to a new five-year high in the vicinity of 116.80 while this report was being compiled.

The pair was able to extend this week’s bullish run and it gained strong follow-up traction on the fifth consecutive day on Friday. There were signals of a little stability in the global money market that unmined the safe-haven status of the Japanese yen which it had enjoyed in the past few weeks as a result of the political turmoil in Eastern Europe. This served as a tailwind to the Japanese pair in the company of the underlying bulls’ sentiment around the US dollar. 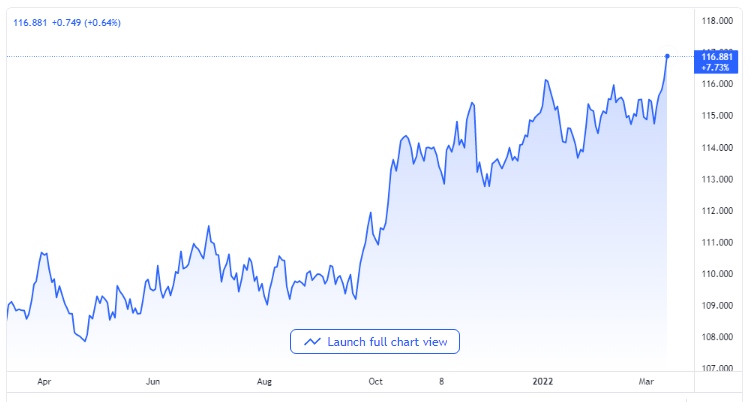 The USD/JPY pair kept attracting some level of support from the strong consumer inflation numbers that came in on Thursday which showed that the consumer price index raced to a fresh forty-year high in the month of February. The report reinforced speculations for a possible beginning of the Federal Reserve’s monetary policy tightening phase scheduled for this March. This was made evident by the overnight sharp increase in the American Treasury bond yields.

A Pair with a Strong Support System

The combined supporting factors aided the USD/JPY currency pair through the initial year-to-date high and it took along with it some near-term trading holding zones near the 116.35 to 116.40 region. Therefore, the current strong move upward might be further connected with some follow-up technical sales, and it might already have set the groundwork for more gains.

That said, worries about a deeper escalation in the crisis between Russia and Ukraine is expected to cap the optimism in the market movement and it warrants a measure of caution from bulls. As a matter of fact, American President Joe Biden is speculated to call off every trade relationship with Russia on Friday, this is to be done alongside other G7 and European Union leaders.

However, the market bias seems to still favor bullish traders while it supports the possibility of a move geared to reclaim the 117.00 benchmarks. Traders are currently looking ahead to the preliminary Michigan Consumer Sentiment Index due to be published later in the North American session. A lot of focus will still be on developments around geopolitical news relating to the peace talk between Russia and Ukraine.