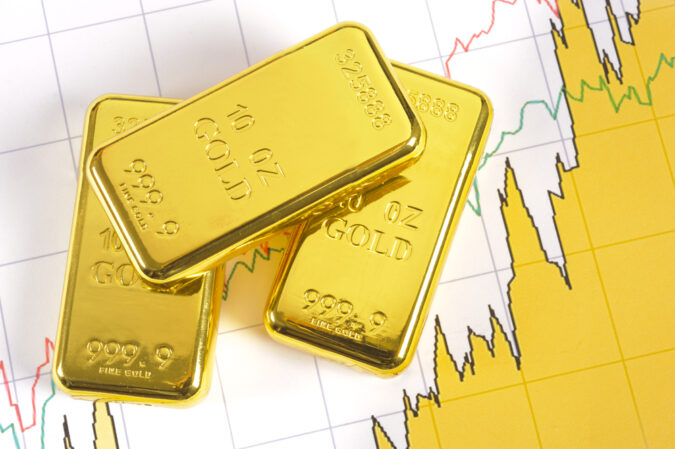 Can gold prices move higher as the Fed raises rates? The upshot is yes, but it generally occurs when the Fed is near the end of its tightening cycle or when the market has priced in more rate hikes than are necessary. The historical correlation between gold prices and U.S. Treasury rates has only been about 28% over the last 50 years. Still, there are times when the short-term correlation is much higher or even negative. For those who plan to use interest rates as a guide to online trading of gold prices as CFDs, an understanding of how interest rates can impact the movements of the U.S. dollar and therefore have an effect on the price of gold is crucial.

The U.S. Interest Rate and the U.S. Dollar

One of the reasons gold prices seem to move in tandem with interest rates lies in the way Treasury yields can impact the movements of the U.S. dollar. Gold prices are quoted worldwide in U.S. dollars. If the dollar’s value increases, it increases the cost of gold for those who do not use the U.S. dollar as their base currency for online trading. For example, if the EUR/USD declines from 1.13 to 1.02, a 10% drop, the cost of purchasing gold for those who use the Euro as their base currency will increase by 10% if they buy gold in dollars. When the dollar’s value rises versus other sovereign currencies, the online trading price of gold can fall to offset this indirect increase in the value of gold.

How Do U.S Interest Rates Impact the U.S. Dollar?

Do Treasury Prices and Gold Prices Move in Tandem?

Gold does not always move in tandem with bond prices. You can see from the chart of the TLT (U.S. 20 year Treasury yield). The long-term historical correlation between gold and U.S. rates is around 28% (as stated earlier), but there are times when the correlation is higher. As interest rates increase, the discounted cash flows for other assets like stocks can become less attractive. Gold could then become a more attractive store of value. Additionally, gold is also used as a haven asset class where investors will purchase gold to balance out the volatility associated with riskier assets like equities.

The Fed and Interest Rates

The U.S. Treasury yield curve is based on what market participants believe happens to interest rates at some point in the future. Online trading of interest rates is predicated on the movements of the Federal Reserve. So the yield differential and the impact on the dollar is not based on what the Fed does, but rather what the market thinks the Fed will do. When the market believes the Fed has ended its tightening cycle and that the interest rate differential will move in favor of other sovereign currencies, this could allow gold prices to move higher. 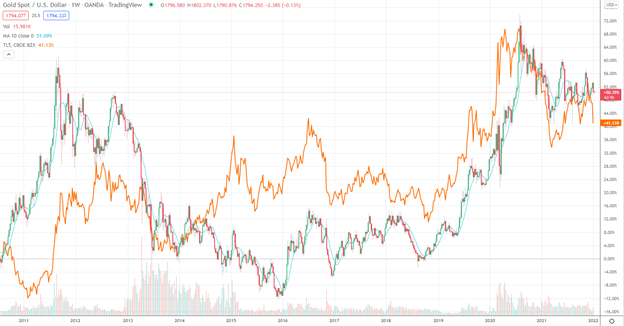 While gold prices generally are not correlated with the long-term movements of U.S. Treasury rates, higher rates will indirectly impact the price of gold. As we have discussed in this article, higher U.S. yields tend to increase the attractiveness of the U.S. dollar. Since gold prices are quoted in U.S. dollars, a stronger dollar usually lowers gold prices. It is important to understand that it’s not the Fed raising rates that impact gold prices but instead the market’s perception of whether the Fed will raise interest rates in the future.